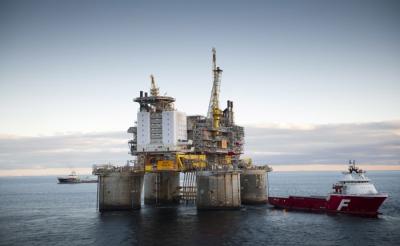 Dr.techn.Olav Olsen (OO) has in 2018 significantly improved their position as leading supplier of Structural Reanalysis Systems (SRS) models of the large concrete platforms in the North Sea. OO has in the past participated in detail design of the majority of the offshore concrete platforms in the world, and our in-depth knowledge of the structures makes us well prepared for SRS analyses. Having a well-functioning and up-to-date SRS model is important for assessing for instance the effects of modifications and changing environments to existing assets.

OO has been responsible for development of an SRS model for the Troll A concrete GBS since 2016, and the model has continuously been evolved to get as close to as-built status as possible. Troll A is the tallest structure ever moved by humans over the surface of the Earth and the concrete GBS extends more than 330 m above the seabed. The model includes a detailed FE model of the entire GBS in addition to simplified models representing the topside. Normal and shear reinforcement amounts are included very much like the actual as-built status. Loads and load combinations are based on original design documentation as well as updated loads found throughout many years of experience with the actual behaviour of the platform. The SRS model is an important component for planning future modifications on the Troll A platform.

Modelling of the Troll B concrete hull commenced early fall 2018 and we are now well on our way of having an operating SRS model also for this platform. The Troll B platform is a floating semi-submersible with a concrete hull, and the experience gained throughout these two projects provides OO with optimal knowledge of all types of SRS analyses relevant for concrete platforms operating in the North Sea.
The Troll field is one of the largest oil reservoirs on the Norwegian Continental Shelf (NCS) and it also contains about 40 per cent of the NCS total gas reserves and both the oil and gas platforms are expected to operate for many more years to come. Establishment of up-to-date SRS models for the Troll A and B platforms thus enables Equinor to make well-reasoned decisions when changes occur in weights, loads or other aspects of the platform operation. For more information about the two platforms and the Troll field, visit the Equinor web page: https://www.equinor.com/en/what-we-do/norwegian-continental-shelf-platforms/troll.html

OO are also currently working with design and modification of other offshore concrete platforms around the world. Maintaining and further developing highly qualified structural engineering expertise has been the cornerstone of OO through almost 60 years.